Two legislators introduce a bill that would allow physician assistants and nurse practitioners to qualify for Meaningful Use incentives. PAs and NPs could qualify for EHR incentive payments if Medicaid beneficiaries account for at least 30% of their patient load.

CORHIO and the Colorado REC partners with BridgeFront to offer providers discounted pricing for its HIPAA education tools and online education.

eClinicalWorks client Primary Health Medical Group (ID) becomes the first practice in Idaho to attest and certify for Meaningful Use of its EHR.

The NYeC REC reports that it is nearing its capacity for helping primary care providers progress toward Meaningful Use, with 2,857 providers signed on. NYeC is offering its services for free through the end of August for providers already live on EHR and for $750 per provider for practices on paper records. Prices will increase to $4,000 -$5,750 as of September 1.

The AMA and 81 other physician organizations request that CMS allow providers to review their data for accuracy before making it public and to standardize the process for developing the public reports and the type of information they will include. 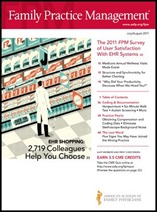 Last month I mentioned a few highlights from AAFP’s 2011 EHR User Satisfaction survey. Surprisingly, AAFP has now made the report available without a subscription (hurry and take a peek just in case it is some sort of mistake!) In addition to providing ratings on 30 EHRs, AAFP offers some insight into physicians’ perceptions of EHRs. For example:

I signed up for Google+ a few weeks ago, but  haven’t invested much time figuring out what it could offer me that I didn’t already have with Facebook, Twitter, LinkedIn, and other social networking sites. However, a couple of physicians offer good insight into why Google+ might be a great solution for doctors. Physicians who want an online social presence may find it difficult to  balance their personal and professional online identities. (I know a lot about managing multiple identities, but that is another story.) Google+ allows you to establish multiple circles of acquaintances, such as family, friends, colleagues, and patients. That means a physician could set up a single Google+ account and control the content viewed by his/her connection, based on the connection’s designated circle. It’s an alternative that certainly seems less time-consuming and easier to maintain that having multiple Facebook accounts to handle professional versus personal relationships.